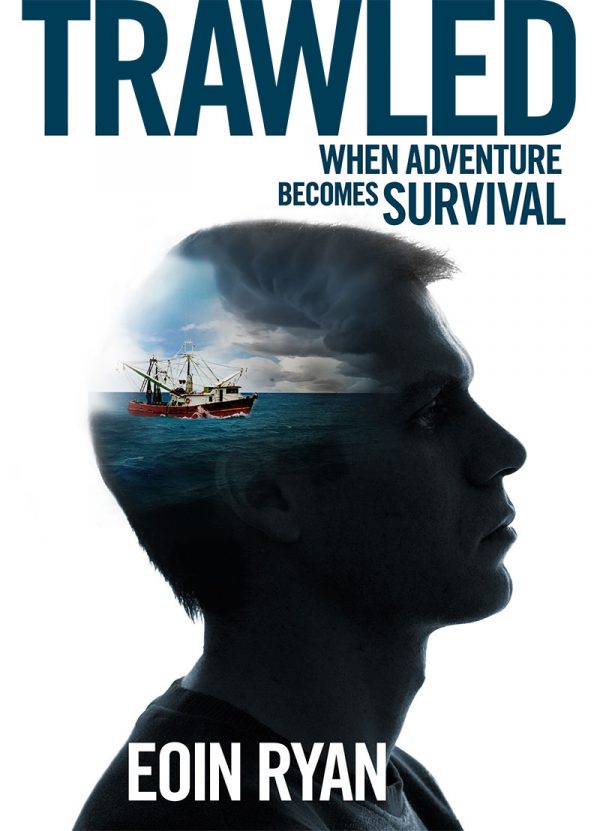 In the summer of 1999, twenty-four-year-old Irishman Eoin Ryan was following the well-beaten path through Australia’s backpacker haunts and hostels. In a search for the road less travelled, he blagged his way onto a prawn trawler plying the tropical waters of the Coral Sea[AW1] .

There he discovered a rarely seen world of hard labour and even harder fishermen, where drinking, fighting, storms and hungry sharks were a part of everyday life. Eoin’s diary captures what one crew member describes as ‘the craziest six weeks of fishing ever’. But when conflict on board reaches a climax, what began as adventure ultimately degenerates into a gripping struggle to stay alive.

Told in raw, uncompromising language, this is an exuberant story of adventure, crisis and brutality, culminating in an unforgettable moment of redemptive grace.

Eoin Ryan is a Dublin-based life coach, motivational speaker and trainer. Trawled is his second book following the success of his first, Outcome Running, in 2017. He is also an entrepreneur, organising road races annually for around twelve thousand people. A serial goal-setter, he has helped many people achieve their goals. The main motivation for sharing his personal story is to encourage others to ask for help sooner rather than later.

PLEASE NOTE THIS BOOK IS NOT AVAILABLE IN BOOKSHOPS  (265 pages)

Note: the donation to AWARE over rides the the €1.00 donation to the International Association for Suicide Prevention (IASP) for the sale of each book by the author (as mentioned on back cover)


Warning: sizeof(): Parameter must be an array or an object that implements Countable in /home/wexford2/public_html/eoinryancoaching.com/wp-content/themes/eoinryancoaching/woocommerce/single-product/meta.php on line 26

Hi Eoin, I finished the book last week. It’s a great read, told with authenticity and passion. There are a whole lot of people thankful for that tri-net been lost. Your story may never have reached others if that event didn’t occur. Life would have been very different for us all, we wouldn’t have realised obviously, but we would have missed out on your positivity. A lot of us have our own tri-net moments that we need to be thankful of, and the last few chapters in your book are a great reminder of that. Thanks for dedicating your time… Read more »

Trawled is a very honest account by Eoin Ryan of his experience of working on a prawn trawler with three tough men off the coast of Australia. He was totally unprepared for the very hard work both physically and mentally. What started as an adventure quickly turned into a nightmare and a fight for survival. The human spirit won out in the end but it was touch and go and could very easily have turned into a tragedy. It is a story of triumph in the face of adversity but it is also a cautionary tale to would-be adventurers to… Read more »

Eoin, I read your book from cover to cover what a horrifying experience it was for you are young man thousands of miles from family and friends in Ireland you joined up with fisherman you did not know doing a dirty very dirty job you had no experience doing, on a trollerthat needed lots of repair. You struggled to stay alive against all odds. I was amazed you are able to write search a truthful account of this treacherous experience. I was delighted to read you turn this tragedy into a positive life experience which changed your life forever. Eoin… Read more »

Trawled ” This book had me from the start, and I ask myself would I have the courage and the balls to do what Eoin did. To step foot on a boat with not 1 iota of fishing experience with total strangers shows his character as to embrace the adventure that was in store for him
Excellent read 🙏 Kenny Egan. Olympic Silver Medalist and Councillor

Trawled tells the very human story of how adventure turned to struggle for survival on board a fishing trawler carrying an eclectic crew of tough men with ample ego. Eoin provides a scintillating account of his experience at sea which opened up a profound journey deep into the psyche when variables beyond his control led him to a realisation that he was trapped and unable to see a way through. Eoin takes the reader on a journey through the circumstances which ultimately led to a profound decision that would have changed everything had it not been for a fortuitous occurrence… Read more »

Eoin’s book is an enthralling read. A tale of adventure, which eventually challenges his very survival. Facing a path of no return, Eoin makes a final plea for help, receiving a sign which changes the course of events for him.

Eoin’s story is one of hope and encouragement, and a message to anyone who finds themselves isolated, to reach out and talk to someone.

Get inspiration and tips from Eoin straight to your inbox.